Spoiler note: Everything up until the Big Bold Warning is strictly spoiler free!

Spanning multiple reboots, timelines, and source material, Fox's X-Men franchise can be a lot to get a handle on. In preparation for seeing Logan, I wanted to go back through and watch all of the X-Men movies. There's a hitch though- there's no defined order to watch them in. Star Wars has Machete Order, but with the X-Men's contradicting timelines, it's hard to know the best way to experience them as a first time (or repeat) viewer.

As a series, the X-Men movies tell the saga of Wolverine. As the only character (and actor) in every movie, he is the thread that binds them all. Following his journey gives us a fairly straightforward look into how it actually happens.

If all you want from this article is the definitive chronological order in which to watch the X-Men movies, look no further:

* Denotes movie has a post-credit scene

That's it! This order follows Logan's journey through time as he experiences it. It traverses both timelines (Original and Revised) and covers everything between childhood to old age. Enjoy!

That's not all you're here for though, is it? You're curious about why this is the best order, and you should be! Well, today's your lucky day.

SPOILER WARNING: To best discuss the details of why my order makes sense, the rest of the post contains major details and character fates of the entire series. If reading that will affect the way you watch the movies, turn back now. 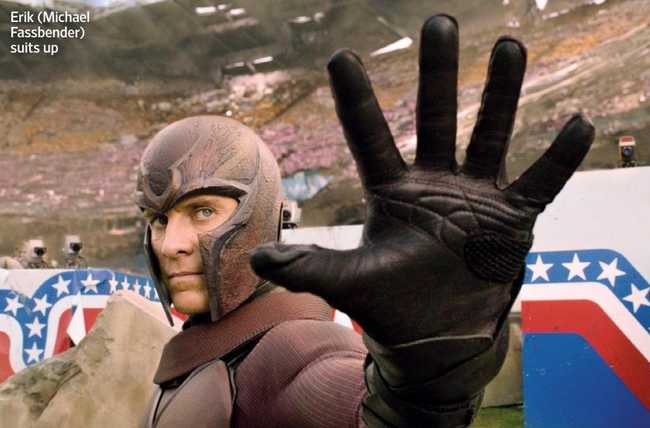 For everyone else, onward!

Like I said, the series is comprised of two timelines. We'll start in the Original, comprised of First Class and all the other movies before the time travel in Days of Future Past overwrites things.

There are two reasonable movies to start with: First Class or Origins: Wolverine. Both take place around the same time (the early/mid 1970's) and act as origin stories for important characters. Assuming Logan is the focal point of the saga (and he is), it makes sense to start with his beginnings in O:W. Between the two, this is the first movie. Plus without seeing this, Jackman's awesome cameo in FC doesn't make any sense.

That being said, O:W ends with a young, walking, and bald Patrick Stewart (see plot holes) rescuing mutants from the 3-Mile facility. From a continuity standpoint going from that ending to McAvoy is confusing because besides that last scene, Prof. X isn't in the movie. Furthermore, FC is just a much better movie; starting new watchers on O:W isn't putting a good foot forward.

Given that either option is doable, First Class is the better choice, followed by Origins: Wolverine.

The latter sees a confused Logan, recently relieved of his memories, running off into the wilderness (which is a recurring destination for him).

Following the aforementioned 3-Mile rescue, Professor Xavier continues leading and expanding his school for gifted youngsters. Logan, lacking any memories, lives his days as a Canadian cage fighter. One day he runs into the hitchhiking Rogue and lives through the events of the original trilogy: X-Men, X2, and The Last Stand (X3). He makes The order here is simple, as they're all direct sequels of each other. Logan grows close with everyone in the mansion and becomes a pseudo-uncle figure to them. It helps show that even as a lone wolf, he benefits emotionally from having a pack around him. This of course makes the ending to X3 that much sadder.

Following X3, The Wolverine finds Logan wracked with guilt over his involvement in Jean's death and fleeing (once again) into the Canadian wilderness. His path soon takes him to Japan where he gets his first taste of a weakened (or non-existent) healing factor. The post-credits scene shows Prof. X and Magneto rejoined as friends recruiting Logan to help them defeat the ultimate risk to mutant-kind: The Sentinels.

Flash forward to 2023 and everything sucks. Not in the sorta-fun Idiocracy way, either. In (the series' peak) Days of Future Past, Sentinels have hunted down and killed nearly all of the mutants. The few survivors hide out in mountains and use time travel to warn their past selves of impending attack. Using this strategy, they send Logan back in time to prevent the sentinel program from ever happening. This leads us to...

From the moment Logan arrives in 1973, he's rewriting history. Everything he does, he does with knowledge of the future, meaning all of his actions are inherently different than they were before. In this timeline, he meets Prof. X, Magnteo, Beast, and Quicksilver years before he would have otherwise. They save the day, rewrite history, and everyone goes home happy.

Well, mostly everyone. After the climactic fight, 1970's Logan is impaled with rebar and drowned in the Patomic river. He's fished out by William Stryker, who's here once again to ensure Logan's enrollment in the RT's incarnation of the Weapon X project.

There's also a flash-forward scene that shows the fruits of the revision in the present day, but I'll get to that later.

We're in full reboot mode! Now that we're clear of any transition from the old timeline, Bryan Singer is free to make an awesome movie without any plot restrictions, so he made X-Men: Apocalypse. This ancient powerful mutant wakes up in 1983 and the world almost gets destroyed or whatever. The main cast from X-Men is reintroduced in their younger forms, presumably to keep making movies about.

Logan is seen briefly as he slaughters some guards and escapes the very military facility that most of the other main cast members are in. Young Jean Grey helps restore some of his memory and then he runs off into the woods (see? theme). The post-credits scene shows that though they lack his body, a mysterious corporation has his blood (which could be the key to reproducing the healing factor).

And Then There Was One

As of 2017, there's a pretty large chronological gap in Logan's story. In Apocalypse (summer of 1983) we saw him as the newly-minted Weapon X freed from Stryker's facility. Later (presumably the Revised 2023?) he's in the mansion with his old teammates during the flash-forward from Days of Future Past. After that, all that's left is Logan in 2029.

As Jackman has said, Logan is his last outing as the eponymous character. Seeing as we're tracking Logan's story, this feels like a fitting place to end our journey.

Technically, Deadpool should fit somewhere. The presence of the mansion and Colossus cement this (totally delightful) movie as part of the universe. At this point it doesn't have any plot connections to anything, but it's a fun watch. Since the Wade Wilson we saw in O:W was part of the erased Original Timeline, the standalone version can safely coexist.

There's no specific date in the movie, but it's clearly in modern day and, the mansion exists. Somewhere around 2016 makes sense. Chronologically, that puts it after Apocalypse but before Logan (which is a 45 year gap). There's a more comprehensive answer about Deadpool's role here for the extra curious.

There's no shortage of articles about the plot holes in this series. Since it wasn't designed with iron-clad continuity in mind (especially across reboots), this is unavoidable. Some of the common complaints are misunderstandings about what gets Revised, but the rest are actual oversights. Honestly though, that's okay. Though X-Men lacks the cohesion of the MCU, it's still a fun set of films (and no fewer than 4 more bad movies can change that).

If you are having trouble keeping everything straight in your head, remember a key tip: First Class always happens. No matter what, regardless of the timeline, FC kicks everything off. Past that, everything is flexible. That's something the production team has discussed too. Most major events will always happen (like the Weapon X project, and Wade Wilson's transformation), but the how and the when will very across timelines. To see literally everything, I'd check out the X-Men wiki's timeline, which compiles all the movie-canon information into a 2-column monolith.

There you have it: a definitive order to watch the X-Men movies to see the entire Wolverine Saga. It's got its ups and downs, but as a package it's wide-reaching, imaginative, and fulfilling.

It's been a pretty awesome ride.