Tuesday started, like most do, with dissatisfaction with my task app. "Surely," I thought, "surely there exists an app that includes all the features I want and none that I don't." I have come to the sad realization that there is no perfect task app.

Many task apps are good and some are great, but nothing will ever be perfect. When an app needs to represent something as unique as a human brain, it comes as little surprise that there's no app that works for everyone. But I don't need an app for everyone, really just for me. I've toyed with writing my own, but it turns out that's a lot of work. Instead, I'm going to describe the perfect app that I would write in the selfish hopes that some of the app developers mentioned below might take inspiration for some of these features in their own apps. Let's get to it!

The ultimate goal for this app is to be able to easily see each task I can do right now and none that I can't. I'll describe each feature that makes this possible, plus showcase apps that do or don't implement each well. Many examples will come from Things 3, my current daily driver.

Complete Tasks via a Checkbox

Starting things off with a simple one: I want a box to press that completes a task. Moving cards laterally into a "done" column isn't nearly as satisfying. Turns out there's no better reward in my lizard brain for tapping a box, getting an animation, and seeing a task disappear.

Many apps have this; Things does a great job:

This is both the single most important feature and the one I'm personally worst at implementing. There are fields of study about creating good UIs 1, so I won't go into it much here. Suffice it to say that it must be easy to add, move, and organize tasks. There are many little improvements that go a long way here: keyboard shortcuts (especially if customizable), snappy animations, and access to important information without being too dense. As you can imagine, it's a hard line to walk.

Things is head-and-shoulders above all competitors here, and it's not even a contest.

Start dates are central to my ultimate goal above. If it's something I need to track but can't complete yet (such as renewing my passport), then it gets a start date in the future. Tasks like these would be easy to find when needed, but hidden from default views until their day has come.

Things has a great implementation of this: 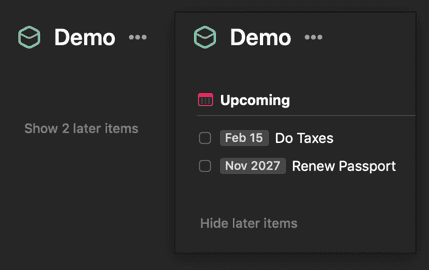 Going a step further, it's important to be able to compliment our future start date with a start time. For instance, "take out the garbage" is a Tuesday task, but can't be done until after dinner. It should be hidden from Tuesday's "Today" view until it's after 8pm. Then it will appear and the app's badge on my phone/watch will update accordingly.

Things falls down a bit here. It's got an "evening" designation for tasks, but you can't currently set a task to be in the evening on a future date. This is likely intentional, keeping Things tied more closely to its GTD roots. As my goal is to keep as much context out of my brain as possible, having to manually defer some tasks to the evening that should have already been there in the first place is frustrating.

Also, a start date without a time doesn't gel well with staying up past midnight. Because of the way I track dates, I wouldn't expect tomorrow's tasks to show up at 12:01am. Functionally, I would probably include a default start time of 5am for all tasks (if one isn't separately provided).

2Do, another old favorite, did this pretty well. The only nitpick was that the App's badge would include "tonight" items before I could work on them.

Most tasks I track don't need to be done by any particular date. I typically assign them a day so I'll remember to address them, but if a task slips a day or two, it's not a big deal.

Occasionally, it's very important to express that a task has a deadline, like with a passport renewal. These should be optional, but very visible.

Of all features listed in this post, this one is the farthest from being commonplace in task apps.

I often find myself needing to represent blocking relationships between tasks. My ideal app would exclude tasks with incomplete blockers from the "available tasks" view (just like tasks with start dates in the future). The task dependency graph could take any shape, but cycles wouldn't be allowed. For example, it's invalid for A to be blocked by B which is blocked by A. It would also be an error to complete a task that has incomplete blockers (instead, mark blockers as complete or sever the relationships between tasks). There would also be a graph view to easily visualize a task tree.

Having this feature really is my white whale. I've thought about it so much that I've created an open-source toy implementation for the system I've described. It should work as a jumping off point for any devs interested in adding dependent tasks to their app.

The best (and maybe only) commercial version of this feature is Task Heat. It's got a good UI for showing the flow of a project and all of the logic you'd expect is present.

You can easy create blocking associations between tasks by dragging an arrow:

It's got a live-updating view to show available tasks in a project:

It also throws a warning when you're completing a blocked task, which I find very thoughtful:

Lastly, it will allow, but visually flag cyclical relationships: 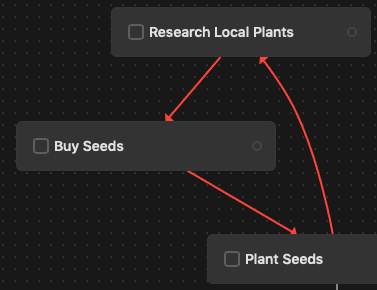 Unfortunately, the rest of the app still needs some time to bake before it's ready for prime time for me, but the fact that this exists at all is promising! 2

A few more popular apps (Asana, Amazing Marvin, and Linear, to name a few) have some notion of dependent tasks. Unfortunately, they're just links between tasks without any added functionality. There's no way to filter for unblocked tasks and all tasks are always completable.

This is another pretty core feature than can get complex quickly. There are two main types of repetition:

It should be easy to stop repetition after a certain date or number of occurrences.

Once again, Things crushes this:

Being that I work at an API-based company, this feature shouldn't be much of a surprise. The utility of a read/write API will vary between people, but no one will be sad to have one. Most commonly, I use them to quickly generate tasks from other apps such as email or Slack. More than anything, having an API removes many limits on the way you use an app, so it's a big win.

Things is a bit of an odd duck here. They've got a superb on-device API, but you have to run those commands on your phone or computer.3 It can't be accessed, for example, by Zapier. Their solution is Mail to Things, where emails sent to a custom address will show up in your Things Inbox. This is a simple stopgap, but lack of support for other Things features (start dates, projects, areas) mean the feature is relegated to simple reminders rather than complex workflows. Given that they can bring any data in from their servers shows that a web API is possible, just not something they've prioritized.

A mainstay of project management apps (Trello, Jira, etc), where a task can exist in one of many user-defined columns such as in progress or in review. This typically comes with the trade-off that changing statuses takes multiple actions (click status, then click desired status). I really only ever need "todo" and "done" and it needs to be fast and easy to move between those.

Things has someday and canceled statuses, which do end up being useful occasionally. I use someday as a backlog for when I record a task, but have no intention of doing it anytime soon. I could live without this though.

A lot of people like these features, but I don't care about them, so they won't be in my app.

This app is just for me, so I don't need UI space wasted for multi-user features. Common features like comment streams, assigning tasks to others, or any sort of in-app-chat functionality are totally lost on me. Many apps have popups/banners encouraging me to "invite [my] team!", which I also don't need.

This is probably the most contentious thing I'll say in this post - I've never found it useful to tag tasks. All of my tasks already live in an area or project. Further categorization typically soaks up a lot of time and brainpower and leaves me with many tags, each with 1 or 2 tasks. I'd rather keep the app nice and lean. Tags can be good for shoring up missing features (such as a backlog item in absence of the "someday" status), but my app will be perfect and will need no shoring up.

If you find tagging invaluable with how you go about your day, do let me know! I'm always open to a change of heart. 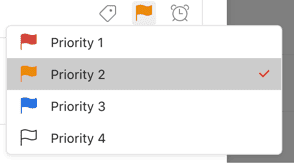 This goes hand-in-hand with tags. Pre-defined priority levels are helpful for balancing tasks against others in a project, they're rarely helpful when looking at collected views. In apps with priorities, I often spend a lot of mental energy trying to define "what exactly priority 3 means to me and how it differs from priority 2". Thus, we'll skip them.

I don't need any sort of velocity tracking or score when it comes to productivity. While this is mostly found in team-based project management apps, there are some personal apps that do it as well (Todoist is a prime example). To those that enjoy such features, more power to you. Productivity points are simply not for me. 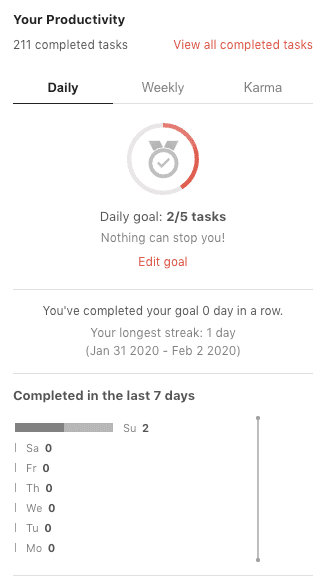 Like I've touched on above, task apps are a crowded field and there are many that do some of the above well. If we've got similar proclivities, here are some apps to keep tabs on:

If you're hungry for more, there's also this comically long list of 47 apps that might have something for you.

So There You Have It

Realistically, my perfect app will never exist. Until then, I'm a happy Things 3 customer (who will never stop searching for the perfect app).

If you know of something better, definitely drop me a line.